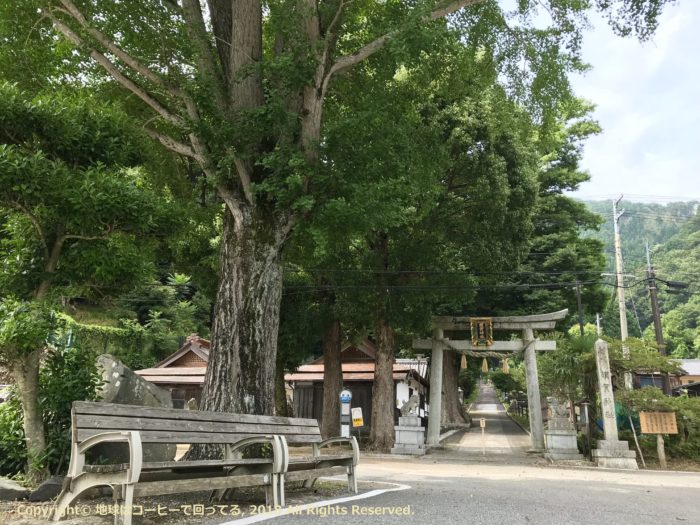 Great ginko tree and the entrance gate of Suga Shrine (by Gaku.Y) 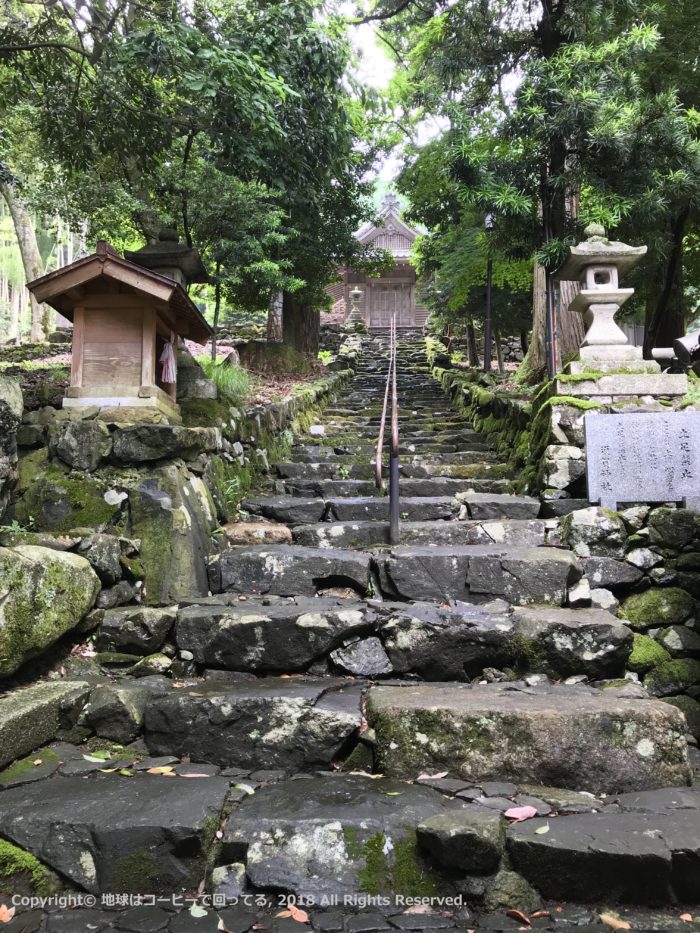 
Suga Shrine* (須賀神社：Suga jinja) is located on top of the hill and surrounded by the nature. From the lakeside, the path stretches up to chozuya (手水舎：purification fountain). And you will see that the mossy stone staircase further leads to haiden (拝殿：the hall of worship). But remember one thing; you have to take off your shoes from this point onward because it’s a sacred territory. Some people walk barefoot but you can also change to the slippers available for the visitors (Not to worry, it’s for free).

This was originally three separate shrines -Kobayashi Shrine, Akasaki Shrine and Hora Shrine. In 1906, the government issued the Shrine Merger Order. To comply with it, these three shrines were merged and became Suga Shrine in 1909. Behind the Shrine, there is a tumulus -said to be the imperial mausoleum of Emperor Junnin (淳仁天皇：733-765). The Shrine recently held the 1,250th anniversary festival in 2013. In conjunction with this historic event, the precincts are nicely done and well-maintained.

As you enter Suga Shrine and walk on the path in blissful silence, you will feel the centuries of history that this little village has preserved until today. 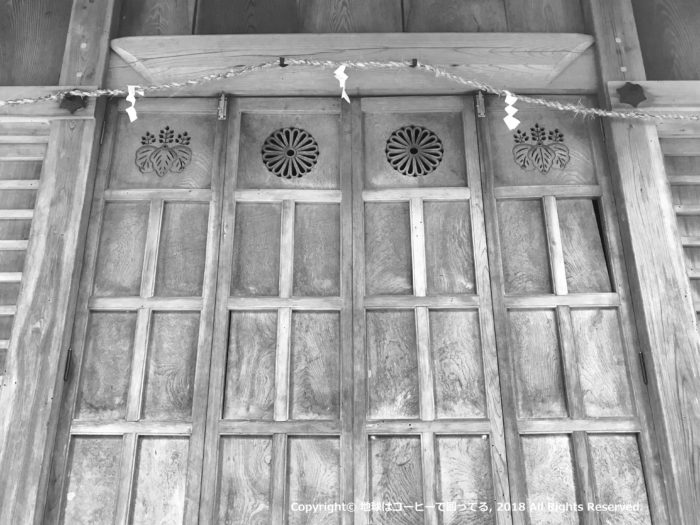 Emblem of Imperial chrysanthemum and 5-7 Paulownia (by Gaku.Y) 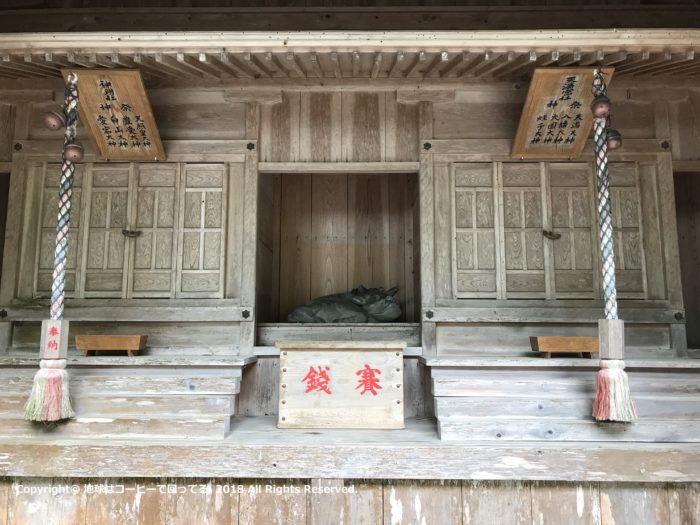 *[Note:] Suga Shrine in Sugaura is not the one featured in the popular animation movie “Kimi no na wa” (「君の名は。」：”Your Name.”)  There are actually more than 20 Suga Shrines throughout the country. 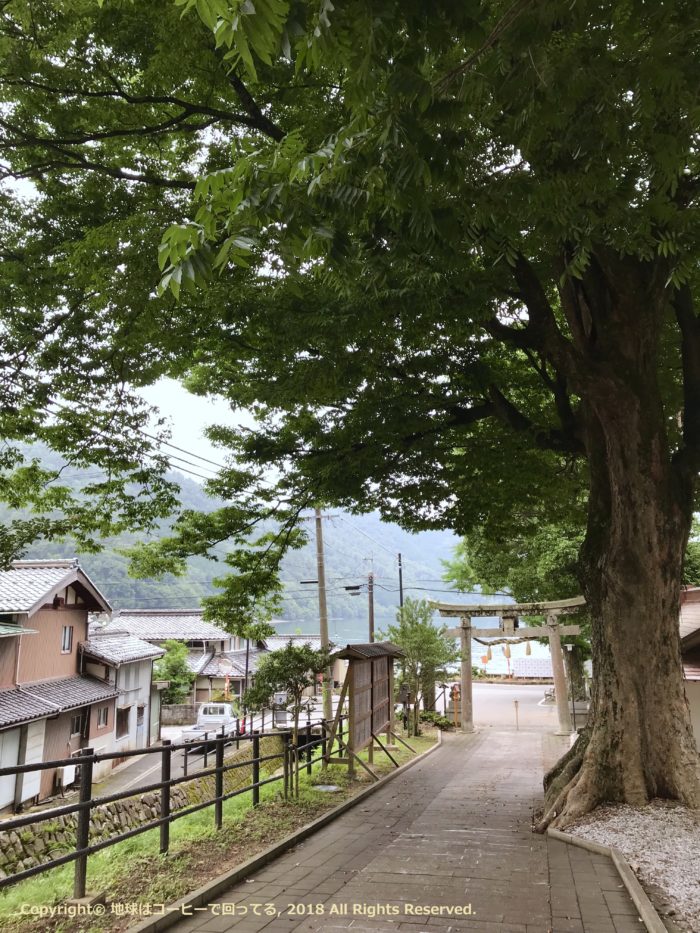 Looking at Lake Biwa from halfway around of the Shrine path (by Gaku.Y)


You will find the Local Museum around halfway down the path of Suga Shrine. This museum is operated by the local people of Sugaura, so it is understandable that they can only open the facility on Sundays. At the museum, visitors can see the display of some historic items such as munefuda (棟札：ridge plaques), ema (絵馬：votive horse tablets), and the resources about So village.

Sugaura is known for its long history as So village. Simply put, So village is a kind of autonomous territory that was common in the middle ages. However, only few references about So village are preserved until today and it’s hard to uncover the full scope of this unique self-rule system once existed in Japan’s history.

Well, Sugaura has kept the complete records of its own history covering from the middle ages down to early modern times which is called Sugaura monjo (菅浦文書：Sugaura Documents). These documents provide us with extremely valuable information about the lifestyle of ordinary people, rules and regulations of the village, and how Sugaura highly developed So village system back in those days. No doubt, Sugaura monjo has priceless value to Japan and it has been proudly designated as National Treasure since 2018. Today, the original documents of Sugaura monjo are kept at Shiga University, but you can see the copy of the documents in part at the Local Museum.


As So village, Sugaura had developed high level self-defense system. These wooden gates with four columns were built at the entry points on both sides of the village –nishi no shisoku-mon (西の四足門：Western Four-columned Gate) and higashi no shisoku-mon (東の四足門：Eastern Four-columned Gate), and they clearly marked the boundary of their self-ruled territory -the inside community and the outside world. Once the person passed the gate, he was under Sugaura’s own judicial and administrative system during the time when So village existed. 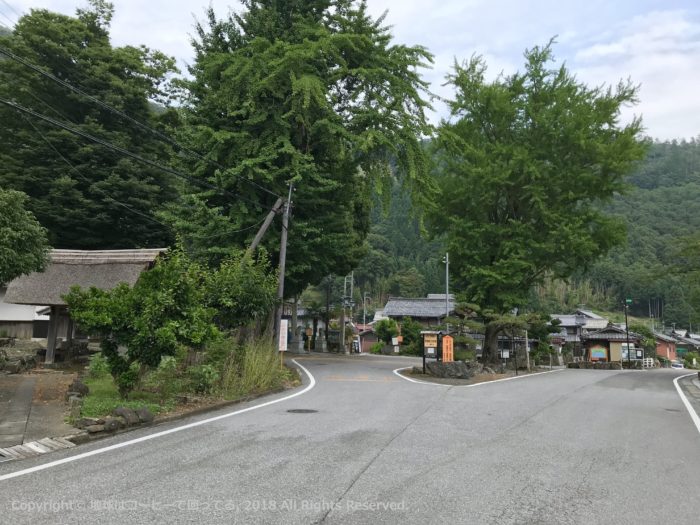 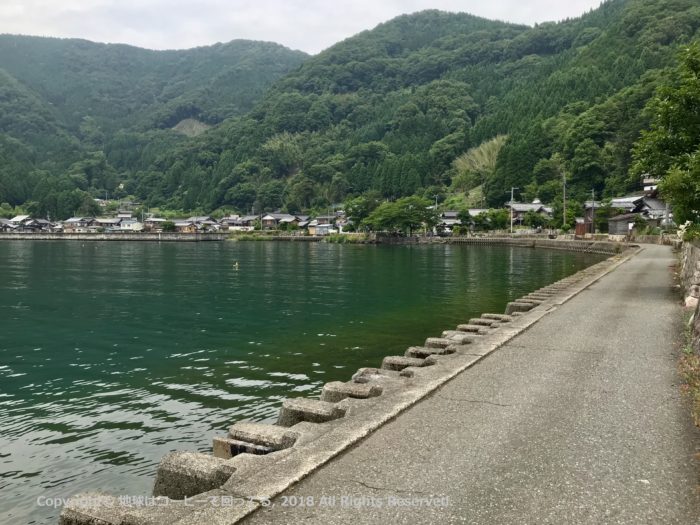 Looking at Sugaura from eastern end of the village (by Gaku.Y) 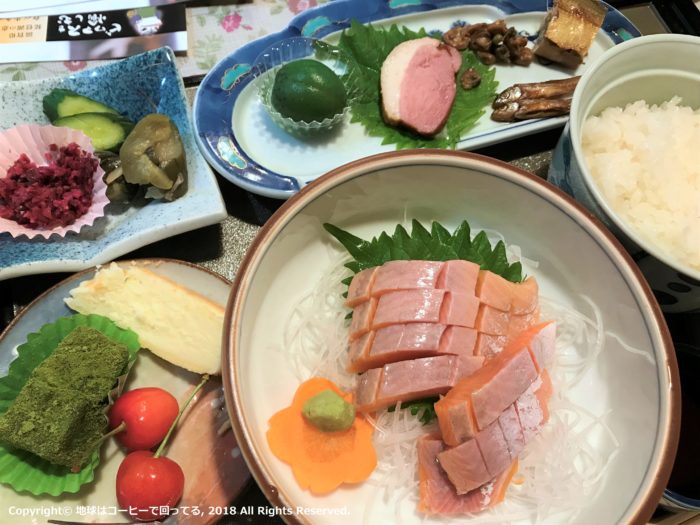 
A little cozy Japanese restaurant kappo ryokan Sakichi has been serving local delicacy in Sugaura since 1945. The owner chef Mr. Iwasa and his wife have a real passion on the food and the customers enjoy the homey atmosphere. Their Japanese cuisine features the local catch of northern Lake Biwa (琵琶湖) –ayu (sweetfish), sansai (wild vegetable), etc. For the set menu, price range is quite reasonable starting from \1,500 (Not including tax & service charge). You will enjoy sashimi set, unagi-don (rice bowl with eel) set, tempura set, and so on. (Ask for the availability of the day)

Sakichi‘s specialty is different types of freshwater fish and they are delicious -no peculiar smell that river fish often have. If they have a stock, you must try Biwa-masu (Biwa trout). You cannot find this fish in anywhere else but only in Lake Biwa. It looks like salmon, but Biwa-masu is sweeter and has more fragrant taste, and it almost melts in your mouth. Also, Sakichi serves seasonal special menu such as kamo (mallard) and suppon (soft-shell turtle).


Originally, this hotel started their business as kokumin-shukusha Tsuzurao (Lodge operated by local government) in 1975. The rooms are Japanese style with beautiful lake-view of okubiwako. Depending on the season, they have variety of activities for the guests. And of course, they offer Japanese dining serving local catch and the famous Omi-gyu beef. 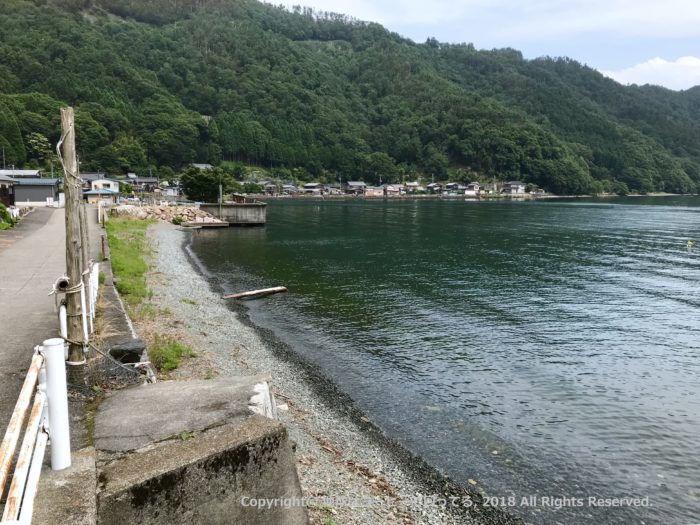 スポンサーリンク/AD
Travelling in Japan? Plan your trip on Rakuten Travel!! 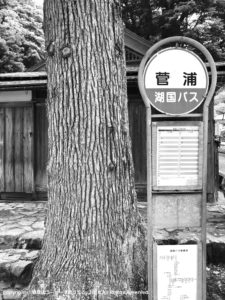 The easiest way to reach Sugaura is by car. If it’s not during the peak holiday season, the traffic shouldn’t be a problem and you will enjoy the nice scenery along the way as you drive the coastal road. You may park your car at the parking area next to the public toilet near Sugaura bus terminal.

Public transportation is also available though it may not be so convenient for the tourists as they only come to Sugaura few times a day. The nearest train station is Nagahara Station (JR Kosei Line). Omi-Railway Bus (近江鉄道バス) runs to Sugaura, and it takes about 30 minutes to get there (\430 per adult).


Alternatively, you may take Kokoku Bus (湖国バス) from Kinomoto Station (JR Hokuriku Line). It takes about an hour to reach Sugaura and the fee is \820 per adult.


As the inbound tourism is booming in Japan, many cities that used to be a quiet place have become crowded touristy destination. But Sugaura still shows us the trace of traditional lifestyle and its peaceful environment. Shiga prefecture boasts its rich nature and the beautiful scenery for Japan’s each season -spring, summer, autumn, and winter. And okubiwako area has the best of all those seasons.

During sakura (cherry blossom) season in spring, lots of visitors will come to okubiwako area to see the gorgeous sakura trees along the coastal road of Lake Biwa. In the early summer, fantastic green sparkles of fireflies will fill the stream. When autumn comes, the surrounding mountains are aflame with autumn color -amazing red and yellow. And in winter, snow will color the scenery like ink painting.

Sugaura is not the place you can easily access to, and the touring the village may not be as convenient as other touristy places. But it will give you a long-lasting memory of your journey in Japan as you find the real local life and culture in this tiny lakeside village. 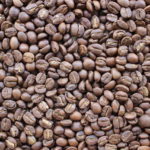 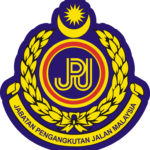 [日本語に変更] In Malaysia, the issues related to driving license often cause troubles for foreigners.  Ev …